A wise man once said, “You cannot serve both God and mammon.” And while I’ve always been taught that mammon means money, I’ve always wondered if this was correct. Just recently I learned that it was almost correct; it turns out that mammon means wealth in Aramaic. It can also be understood as riches, neither of which are much different than money. 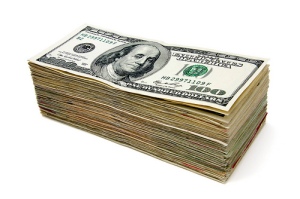 When I think about money, I think about how this 3in x 6in piece of paper is, ironically, what makes the world go round. And when I start to think about it for too long, it makes my head hurt. But I want to bring some clarity to this notion of money, wealth, riches, mammon–so here it goes:

Money is a means of exchange. It’s a middle man actually. Back in the day, people exchanged goods for goods, services for services. These goods and services were used. It was practical. But now, we exchange money for goods or money for services. Now, our goal is to accummulate money. And this isn’t just in America, for when we travel to another country, we exchange money for money so that we can buy within that market. What’s a market? Good question. As I understand it, there’s basically two types of markets. There’s a free market and a controlled market. In the U.S., we claim to have a free market, aka capitalism.

In capitalism, the means of production and the creation of goods or services are privately owned. The goal–profit. But there’s a few problems with this set-up and over the years, people have noticed. For example, G.K Chesterton once stated, “The chief heresy of vulgar capitalism is the fundamental falsehood that things are not made to be used but made to be sold.” In other words, we buy to buy; we don’t buy to use. So we have an abundance of goods that we never use, which in turn, creates an abundance of waste.

Going back to the quote at the beginning then, it seems that the person saying “You cannot serve both God and mammon,”  is pointing to an inherent quality within mammon. Mammon isn’t a neutral. It’s a competitor. And it competes against God.

So the more I think about this, the more I wonder if, when it comes down to it, Os Guinness might be right. “Either we serve God and use money, or we serve money and use God.” Which are you doing?